My dad gave me some big zucchini today so I promptly came home and mixed up this zuc bread. It’s delicious! 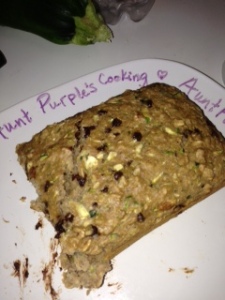 How do you lose weight? Or maybe the question is how to keep it off? I’ve been enjoying the South Beach Diet the past few weeks. It’s forced me to eat more vegetables and protein which I know I need to do. But what works for me may not work for you. Don’t be afraid to experiment with different plans to find what works for you. Find something that isn’t a short term fix, but a way to eat and exercise that you can maintain for years to come.
Some of you may be struggling right now. If that’s you I am praying that you will find what works for you and that you will be healthy and able to live your life to the fullest as God intended.

Mix yogurt, cilantro, lime juice and taco seasoning in a small bowl; set aside. Spray a medium skillet with cooking spray and cook cabbage about four minutes or until the cabbage is just barely wilted. Season with salt and pepper and set aside. Cut shrimp into thirds, so you have little bite size pieces. Sauté in two teaspoons of olive oil and season with salt, pepper and a dash of cayenne pepper over medium heat just until done. Place a scoop of cabbage on the warmed tortillas taco, then top with shrimp, and cilantro sauce; serve.
Yield: 4 servings. Per serving= 306 Calories; 7g Fat (21.1% calories from fat); 35g Protein; 26g Carbohydrate; 13g Dietary Fiber; 221mg Cholesterol; 624mg Sodium.

Quinoa [keen-wah] has such a nice nutty texture. It’s a great substitute for rice.

I think I like these better than Kale Chips as Kale smells stinky. BUT, these zucchini chips shrink up a lot. They are a tasty chip though so make a bunch.

Preheat oven to 225*. Slice the zucchini really thin. Pat dry with paper towels. Toss in a bowl with the salt and extra virgin olive oil. Spread in single layer on cookie sheet covered with parchment paper. Bake one hour, then turn them over and bake another hour or until browned and crispy. You see in my picture some are not browned. They were sliced a little thicker than the others so I removed the browned ones (Ok, I ate them) and baked the less done chips longer. Delicious!

Really they were more like lettuce tacos, but that’s still good!

Take some roasted chicken pieces and put in a large lettuce leaf. Add some sliced celery and shredded cabbage and either a little blue cheese dressing or blue cheese crumbles. Sprinkle with wing sauce and eat!

Easy! And you know I love wing sauce!

Just take a head of cauliflower and pull it apart. Bake at 450* 15 or 20 minutes on a cookie sheet. Sprinkle wing sauce on the flowerets and bake another 5 minutes.